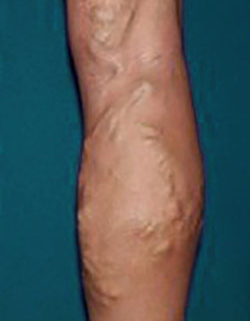 One of the most common misconceptions about varicose and spider veins that many doctors (as well as patients) believe is that varicose vein treatments and spider vein treatments are considered cosmetic in nature, and therefore not covered by insurance. While this is true under many circumstances, ascribing to this myth can have possible health consequences for those who have the more serious variation of the venous disease. Specifically, that they might avoid varicose vein treatment due to the potentially false belief that they must cover the entire cost as an out-of-pocket expense.

As your vascular surgeon can attest, vein disease is serious. However, when there are many med-spas and similar cosmetic treatment centers that address only the cosmetic variety of spider veins and varicose veins, who also do not work with insurance on those procedures, it is understandable how the misconception has proliferated greatly.

Patients should look for certain symptoms that may indicate that the superficial varicose veins may be progressing to or may be indicative of a more serious vascular disease, such as phlebitis, Deep Vein Thrombosis, blood clots, or open sores or skin ulcers.

Important symptoms to watch for, in the area of the varicose and spider veins, include tenderness or pain, wounds or ulcers, throbbing sensation, burning or tingling feeling, feelings of tiredness and fatigue in the legs, or veins protruding noticeably far or getting worse. If any of these symptoms are present it’s time to head to a doctor…a vascular doctor or vascular care center.

Your vascular specialist will be able to tell if your spider vein and varicose veins represent a more serious underlying issue, such as venous reflux disease. At this point, they can also verify your health insurance policy for coverage. Most venous diseases (that are more than just superficial) are covered by insurance, especially due to the serious nature of vascular disease.

The San Diego Vascular Center specializes in diagnosis and treatment for any and all vascular health issues for patients in San Diego County, Orange County and Riverside County. For more information or to set an appointment, please contact us.

Prepare for your
visit today!

Find out if we take
your insurance

SDVC in
the Media

Are You Familiar with the Different Types of Peripheral Vascular Disease?
Scroll to top